Fukushima: There's a Hole in the Bucket 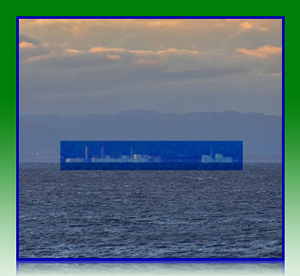 And the bucket in this case is the Fukushima Daiichi nuclear power plant in Japan, a radiating time bomb that now is causing frightening headlines punctually at the precise square of Jupiter and Uranus. According to the most recent explanations by the Japanese Ministry of the Environment, up to 300 tons of radioactive contaminated groundwater run into the ocean every day. And now there are even more leaks, so the radiation exposure is getting higher and higher. We have already described the background in two articles (Japan: Attempt at an Analysis and Fukushima and No End ). Now the question arises as to how long this systematic contamination will continue.

We can say this right at the start: A quick improvement is not in sight. All of the reactor blocks have relatively reliable data that shows a basic tendency. Fukushima remains in the crosshairs of Uranus and Pluto.

The beginning of construction for the first reactor block started on July 25, 1967 (no time available). Even the first glance shows a classic disposition to accidents; Mars (2° Scorpio) stands in the square to Leo-Sun. Pluto and Uranus (both signifiers for nuclear power) stand in conjunction with each other. With the corresponding time, the Pisces-Moon could also be in a wide opposition to it.

For the further course, the positions of Saturn and Mercury – which stand in the square to each other – are important. On the old familiar degrees of 12 Aries or 13 Cancer. In addition to the tendency to have accidents as a basic Sun theme, disfunctionality is also indicated here; in this case, it is the connecting parts (Mercury). It may also be an expression of the operators no longer understanding their own reactor and not having any idea of how they should solve the problems. 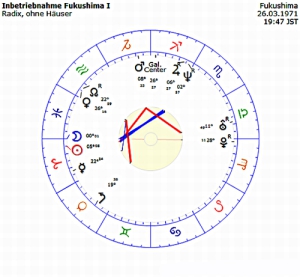 The operation of the plant commenced on March 26, 1971. Aries-Sun on 5°, a possible Aries-Moon at the start, and a Mars – Uranus square of Capricorn to Libra. Pluto approaches the mundane of the Mars position up to 25 arc minutes in the next days. Uranus mundane is currently in the opposition to its basic position, just a few arc minutes away. Strangely enough, the same Uranus position (3 arc minutes deviation) can also be found at the network synchronization of the reactor, another important point in the life of a nuclear power plant. Daiichi I is also symbolically in a "midlife crisis." In terms of a technical structure, we could also say that it is falling apart at this point. If we take just this data, we can assume that the next months will also not bring any true calming – quite the opposite.

If we assume that someone wants Pluto as an ally when building and starting up the operations of a nuclear power plant so that it is well attached and integrated into the overall picture, then we can just congratulate the operating company of TEPCO. From the astrological perspective, the corresponding point in time could hardly be less favorable when it comes to arising difficulties in the short or long term. In order to keep things clear, here are the corresponding aspects of the individual nuclear reactors in a quick overview: 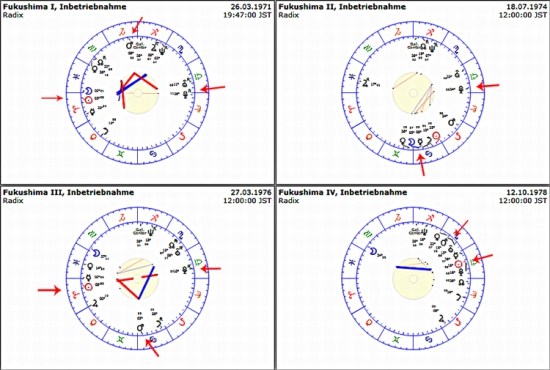 Moon, Mercury, and Saturn between 6° and 10° Cancer in the square to Pluto on 4° Libra.

Sun 6° Aries in the square to Mars on 3° Capricorn and opposition Pluto on 10° Libra.

The Pluto aspects are only mitigated somewhat for the nuclear reactors V and VI (with just a Mercury opposition Pluto at 16° Aries and/or Libra for Daiichi V and Mars square Uranus for Daiichi VI); both are still in operation.

In the meantime, the operator company TEPCO has been de facto put under state control. This is presumably so that the original owner will ultimately be protected against future indemnity claims. However, this means that the political decision-makers in Japan are now responsible for the pacifying the chaos that has been created. But we should give up any hopes for quick solutions at this time. At the least, problem reactor number 4 will continue to provide "surprises" up to and including 2018. Only then will Pluto also exit from the square tension with the Sun and Pluto of the commissioning. Up until then, the information will continue to be extremely diffuse since Neptune is now wandering increasingly into the square tension with the Neptune positions of the reactors. Without massive pressure from the outside, the true dimensions of this catastrophe will also continue to hardly be revealed.

Those who still believe that nuclear power can be controlled should perhaps ask themselves the following question: How will hacker attacks on the systems of nuclear power plants be prevented in the future? Stuxnet has shown that there is little protection against this; in the age of drones and cyber wars, the inhibitory threshold will probably not be all that high during warlike conflicts to also use an "enemy’s" nuclear power plant as a weapon.

Those who want to split what is undividable (Greek: átomos) must be prepared for uncontrollable risks. This is also demonstrated by the charts of the first discovery, the first fission, and the detonation of the Trinity Bomb. 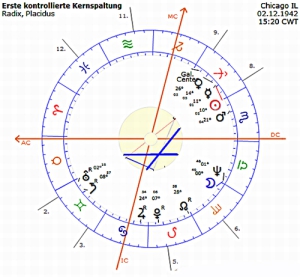 The discovery of nuclear fission by Otto Hahn on December 17, 1938 under a Sun-Galactic Center (GC) conjunction basically explains everything that we need to know about it. This is where we move in borderline areas that also lie beyond our concept of material reality. The tremendous release of energy through the splitting of a "tiny" core of an atom goes far beyond the scope of every concept. The square to Neptune also distinctly indicates that there is ultimately also no true clarity in relation to the consequences and backgrounds. In any case, these are deceptive delusions, a type of self-declared Hollywood for yearning scientists, together with the dream world of unlimited power.

This is continued in the event chart of the first "controlled" nuclear fission, which was conducted by Enrico Fermi on December 2, 1942 in Chicago. It has a Sagittarius Sun once again, but this time in opposition to Saturn (and to some extent also to Uranus). At the same time, the Moon and Neptune have the closest, approaching conjunction. Although the claim to "controlling something" (Sun-Saturn) can be found here, the Moon-Neptune tends to turn the entire situation into a "religious" matter; even back then, it already obscured the clear view of the actual background. And this also provides another indication of the "otherworldly" aspect of this "magnificent scientific achievement": Moon-Neptune is in conjunction with the Super Galactic Center, a Black Sun. 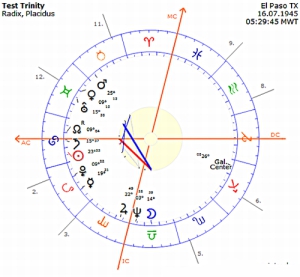 The detonation chart of the first atomic bomb at the White Sands Proving Ground on July 16, 1945 then also clearly shows what occurs in our reality. Saturn stands on the precise degree at the AC of the detonation, in the square to the Moon with the MC on 29°58´26” in Pisces, according to the harmonizing resonances on the Neptunian super point. So this means death and complete dissolution: no more space for longing gadgetry and false hopes. And when Uranus crossed this MC point in April 2011, Fukushima became the symbol of a technology that keeps our world in fear of a global catastrophe to this day. In the coming months, this Saturn of the first detonation -- together with the Moon square -- will be triggered again through the current positions of Uranus, Pluto, and Jupiter. We should comprehend the new reports from Fukushima as the demand to bury the entire nuclear program as quickly as possible before further "surprises" show with even greater intensity that the concept of a "clean and peaceful use of nuclear energy" is pure wishful thinking combined with hubris.