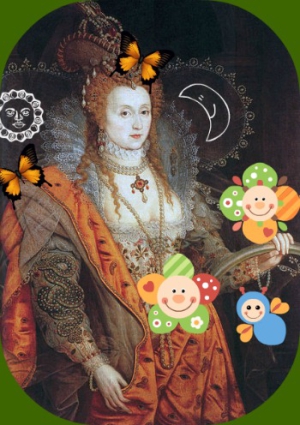 You made it! Even though it was not completely 0 degrees Leo, we were sailing close to the wind in respect to the full moon: Loop! was exactly one-and-a-half arc minutes wide of the mark with the astrological hopes for the king's birth. The new little prince of the United Kingdom was already secretly, silently, and quietly born into the world around 4:24 p.m. (London time) and therefore barely still has a Cancer Sun in the truly very last fractions of an inch: 29.58.44 degrees, with the ascendant Scorpio in the auspicious 27th degree and Venus at the royal star of Regulus, plus a strong Uranus connection through the AC and MC Lord in the nearby square to the cosmic rebels.

So Kate and William are now finally parents. The Duchess "worked" (women in England have "labor" instead of contractions) – according to the initial mental math – for about ten hours. More than four hours after the birth, she was feeling fine again, even though the day that she became a "mommy" was the hottest of the year. With this considerable delay, the public was then informed while the astrological world already expected that it was halfway in the realm of the Leo kings. The Queen’s – unusually delighted for British understatement – then stoked the rejoicing in front of the palace.

"We could not be happier," is the message that the youngest father of the royal family, Duke Wills, who was once also called "Wombat" by his parents, in his first statement through a palace speaker. But how does the natal chart of the even much younger successor to the throne? It is a powerscope with the Sun and some other factors in 8, the Moon in Capricorn – so it is close to a full moon—image. Yet, the royal zeroth degree, the royal's challenge cup, is still part of the radix: Venus is namely located at 0 degrees Virgo in House 9. What does all of this mean for the Empire? Court reporter Ms. Wetterer will soon have the astrology of the new prince analyzed extensively. Until then, we will rejoice with the island – which is now emotionally completely beside itself (also a typical Mars-Cancer phenomenon, close to Jupiter) – and wish Mum, Dad, and Baby Cambridge all the very best and above all, that they finally get some quiet from the absolutely disinhibited public. May he grow and thrive and bring a bit less monarchist dogma and more emotional empathy to the world with his water trine. The boy has the makings for this – double water – if the witnesses of the birth took a proper look at the clock. Which can be expected from a national event of this magnitude (even if the information on physical height information is still unknown at this point). 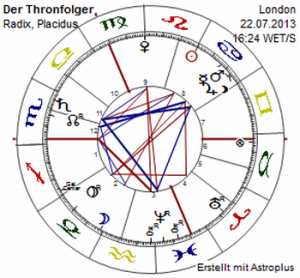 And the first radix, based on the official statements, is at the right here. Baby King will be correctly addressed with the title: "His Royal Highness Prince XY" (name to follow soon). By the way, he is already quite robust at almost four kilos in weight (AC-Lord Pluto in 2 and the old Lord Mars in conjunction with Jupiter). This is as much as we already know. Grandpa Charles is said to already be euphoric and grandma Camilla is also really quite amused. For Charles' circumstances as he still waits for the crown, these were touching words that he otherwise just shares so spontaneously about his beloved flowers. He supposedly said this immediately about his daughter-in-law and his son:

"It is an incredibly special moment for William and Catherine...a unique moment in anyone's life." And he and the new grandma are very thrilled (WELT). What great-grandma Elizabeth thinks about the very young, royal citizen is not yet known. After all, she always needs somewhat longer to show a reaction as a Taurus. But one thing is certain: The little boy has a Sun-Sun square with her. After all of the excitement about the successor to the throne, Kate's birth time may also still be announced at some point. So that the astrologer world has more points of reference to calculate for the next kids of the kings. The first rather ecstatic, official gentlemen in suits soon poured out of the Lindo Wing of St. Mary's, where Kate gave birth. They had apparently already been allowed to see the child and tossed delighted comments to the journalists: "Wonderful baby, beautiful baby!" The relief that everything went well was so enormous. Incidentally, it also finally began to rain in London just before midnight on the little lord's first night, which allowed the city to very slowly get back to business as usual after the scorching heat and enormous suspense.

In any case, we correctly predicted that the boy must now be named Alexander if the British stay with their desired names. Kate and William supposedly did not know in advance whether it would be a boy or a girl. However, a male successor to the throne was a bit more likely in astrological terms due to William's Saturn-Jupiter-MC around the time of the conception. Even if the world as a whole certainly has more important things to do than just be concerned for days about one privileged child of the many, many new additions to the human race who are born every day completely without any notice: In such a moment, when a new symbolic figure for the old human wishes for a bit of luster, joy, and security practically falls from heaven, a birth is not just a birth. King or not. Every baby brings a bit of new hope with it to the planet. Time and again. And this still remains the very best news in the entire king hype that is hard to elude in the media world!