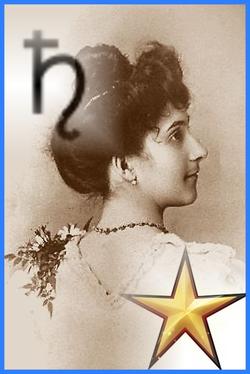 He lived for 42,422 days or more than 116 years - if his data is correct, which has even been scientifically studied in the meantime. The Aries Methuselah Jiroemon Kimura has now died, six years younger than the mega-record holder, double Pisces Jeanne Calment (picture) who entered the annals of age with her 122 years. Even with a different birth month, the Japanese Kimura (who the registry office has recently presumed to be a Pisces after all) would have a linked lucky four-leaf clover of Uranus, Saturn, and Jupiter in his horoscope. However, the oldest person in the world has now made space for an Iron Lady by the name of Misao Okawa (115 years and 100 days) on the list of evergreen human beings. In turn, this little persevering Pisces woman proves to have super stamina with the three slow-runners, a signum of the golden vintage that has only been survived by a handful of the elders. But what about the personal, astrological indications of a long existence – even without such generational aspects?

In astrology, Saturn (the Capricorn ruler) is always also the lord of the three time periods: past, present, and future – what has come into the world, what exists, and what will still happen. It reflects time itself, which also includes old age. A well-placed Saturn as the basis of a very long life is therefore certainly not a flaw because it also symbolizes stubborn and stable relationships in every respect. Yet, whether someone exceeds the customary span of existence also depends just as much on Jupiter. Because it exaggerates everything that lives to the point of the superlative, it also stands for records. Capricorn, as the sign after Sagittarius and therefore also its "2nd House," marks Jupiter's talents and longevity when it is connected to Saturn. These two factors are also found more frequently in “ancient” people, linked with their personal planets. According to the currently presumed date, Jiroemon Kimura had a good Sun-Jupiter trine and Moon-Saturn; his successor Misao Okawa has a Moon-Saturn-Uranus trine with a Jupiter sextile and Sun-Saturn.

In India, research on the expected lifespan has always been more popular and finely differentiated than in Western astrology. Even the missing houses usually cause problems in more precise studies for Western astrology. In the gray past, when the record holders were born, not all registry offices worked in such a detail-obsessed manner as today. But of all people, Jeanne Calment – the above-mentioned daughter of a French shipbuilder – had a complete chart with the birth time. She reached the unbelievable lifespan of 122 years, 5 months, and 14 days. This is officially the longest verifiable human life on our blue planet. With Sagittarius-Mars in House 9, she began fencing at the age of 85 and liked to ride her bicycle when she was 100. She already tried to stop smoking at 117 but this attempt only succeeded when she was too blind to find her lighter at the age of 119. Jupiter in House 8 in Scorpio makes so much self-determination possible.

Although there is no one single planetary signum for the Platinum Agers, some similarities exist. Jeanne, the Frenchwoman from Arles who knew Vincent van Gogh when he was still alive and even sold him a few paintbrushes, has the close Sun-Jupiter trine in common with the now deceased Kimura. The Sun as the vital force and location, connected with the expansiveness of Sagittarius, can make a person resilient. This especially applies when Jupiter is the Lord of House 10 and therefore is the auxiliary Saturn that has a life-extending effect in its implementation. Calment's Saturn in House 12 (hardships suppressed) gave her a peaceful life, except for the fact that all of her loved ones died before she did.

But despite her birth 20 years before Kimura, Jeanne also has Jupiter, Saturn, and Uranus plactic in tension – so the union of the three natural signs is strong beginning in Sagittarius. Such chains of rulers, which track a zodiac character sequence, are always conspicuous in birth pictures and usually very favorable in the sense of resilience against every life challenge that these people master in a more "natural" way because they are more strongly in the flow than others.

The particular position of very old people can also be seen in the charts of what is probably the most unusual longevity pairing that has been heard of up to now: Yoshino Tanaka and Maria Gravigi-De Candia (midday status left). Both of them were born on the same March day in 1900 (thousands of kilometers apart) and are now both 113 years old. They are both simultaneously ranked number 10 in the list of living world record holders for age. Both of these elderly women once again have the Pisces-Sun (Sun-Jupiter-Uranus-Pluto) that is strongly tensed in the slow-movers, as well as a Saturn that supports Mars in the sextile. The Moon and Venus in Aries add the share of direct fighting spirit to the mix.

Incidentally, all eleven of the living super-centenarians are women. However, the American James McCoubrey – who is now the reigning oldest man in the world after Kimura's death – also has a Saturn-Jupiter conjunction, as well as Virgo-Sun Square Uranus. But when compared to the women, he is still a whippersnapper with his 111 years.

The town of Kyotango, birthplace of recently deceased Jiroemon Kimura, has repeatedly produced very old people and is therefore also considered to be the stronghold of the centenarians. The new chart – produced after the communities were merged – therefore probably also reflects the cases of good fortune in aging (the location radix for midday is on the right). Jupiter, Saturn, and Uranus in connection with descending signs and the Sun-Saturn Square.

However, the first person who was proven to be older than 110 years did not come from Japan; this was the Dutchman Geert Adriaans Boomgaard. He was a Virgo like McCoubry, the new male head of the oldest list (the axis of Mercury-Neptune appears to generally be very popular for the jubilarian Sun). Boomgaard had Jupiter-Uranus and presumably a Moon-Saturn square.

For 50 years, the Taurus woman Delina Filkins held the age record as the first person on the planet to live longer than 113 years. She had a Sun-Saturn square. Margaret Anne Neve, the first woman in the world to become older than 110, was a Taurus – with a Moon-Saturn conjunction in opposition to Jupiter. Another Earth-Sun (as we know, Earth likes to create stable life conditions) is added by Marie-Louise Meilleur, a Canadian woman who reached the age of 117. Her chart shows a Sun-Uranus conjunction, once again in Virgo and with Jupiter-Saturn in a wide conjunction. The next-younger person (116 years and 347 days) was Maria Esther Capovilla, another Virgo. Quite typically, she had a Jupiter-Saturn trine close (with Mars) and a Moon-Saturn square. The oldest German is currently Gertrud Henze of Lower Saxony with 111 years. She also has the Sun-Uranus conjunction, but this time in Sagittarius, and a Saturn-Jupiter conjunction.

No one knows whether there is truth in the legend that Habib Miyan of India, who died in 2008, was really 139 years old – as his family claims. The certification of births was probably not as customary back then. But it still fits well with the astrological pattern: the Sun in a movable sign, Saturn opposition, and the Mars-Jupiter trine.

Mary P. Romero Zielke Cota and her daughter Rosabell are also unique in this world: They are the only official mother and daughter anywhere who lived to be older than 110. Mary had the Sun-Uranus in Cancer and a Gemini cluster (with Jupiter in opposition to Saturn), and her daughter had a Scorpio Sun and also a Uranus conjunction.

The oldest siblings internationally have both celebrated their 110th birthdays: Katherine Davenport with Venus-Pluto-Saturn square and a trine to Jupiter and her sister Nelle Eby (chart on the left) with an unbelievable eight factors in Taurus. This person does not leave any place all that easily, which also includes life in general. She also has Saturn-Jupiter again – in the trine to Uranus.

The last chart of a record holder comes from a very different corner. Norris McWhirter (RADIX) is the man who created the Guinness Book of Records. So the issue of records must also be reflected in his birth picture. Excessiveness = Jupiter / significance = Saturn. And lo and behold: The man has a Sagittarius-MC with Jupiter in Capricorn (indirect Jupiter-Saturn) and Saturn itself as a second analogy at Apex 9. After all, the God of Moderation represents not only very long life for human beings but also for things that can become important for the world. In this respect, McWhirter's Book of Records was very much in line with his horoscope.

This leaves the question as to why Uranus of all the planets also appears to have such a frequent dominance in the charts of the age record holders. Apart from the rather lame explanation that the older people become, the more separations they experience even just in mathematical terms: After all, these ancient Platinum Agers are ultimately always very eccentric. They stand out in their own way and are not average people but extremely different than the John and Jane Does with their much shorter lives. This is simply typical of Uranus.