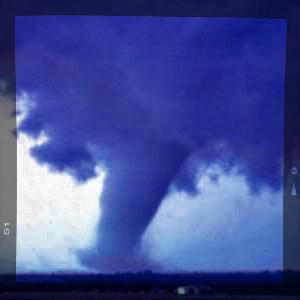 While watching yesterday's evening news, I was already delighted that no little red lights were flashing. It seemed like business as usual. Just a few more hours and the square between Uranus and Pluto would be exact for the third time – and nothing happened. Astrologers sometimes truly hope that certain images in the firmament will have no meaning for once.

Then the pictures from Moore, Oklahoma, a small town devastated by a tornado, arrived this morning. The residents say that it appeared too quickly and too suddenly. And sixteen minutes advance warning time was too short, even for the inhabitants of a city in which tornados have become a threat over and over again. Which raises the question: Are there perhaps astrological signatures under certain circumstances within specific timeframes that could at least provide a rough idea of such natural phenomenon? And, if the first meteorological warning signs could actually be observed, would it be possible to lengthen the advance warning times?

This is certainly a daring thesis and I candidly admit that I have hardly thought about this combination up to now. Even if it was quite customary in earlier times to derive medium- and long-term weather forecasts from astrological constellations. But we now live in an age in which even a majority of the astrological community is convinced that there is no causal effective correlation between positions of the planets and "outer" events. Instead, astrology is more or less seen as just a symbolic language of the spirit that solely enables pictorial access to our inner areas of experience.

But if we assume that there is a correlation between such disastrous natural phenomena as this tornado and certain planetary positions, then it would be hard for this to "not be the cause." So there must also be a mechanism of action in the broadest sense that reveals itself as a result – unless we consider a tornado to be just a symbolic image for inner, vehement movements. So this is a balancing act, and I would like to say this right at the start so the impression does not arise that someone here knows why the town of Moore was destroyed by a tornado yesterday. And that I could give the astrological reasons for it. I have no idea, but I can at least do what I always do: place the picture of the events next to other, similar occurrences and search for conspicuous factors. In the broadest sense, this is probably called open-ended research.

At 2:56 p.m. local time, the tornado had touched down yesterday for the first time. We can obviously wonder extensively that the absolute exactness of the square between Uranus and Pluto was achieved just three hours later. And the symbolism of both energies can also be appropriately transferred to the development of such a storm. The suddenness, the chaotic and surprising moment are a Uranian expression, and the destruction of fixed structures and the basis of life is a Plutonian image. If the two are construed in a psychological sense, there are many possibilities of interpretation that also contain a positive transformation and change. But in relation to the actual, concrete events, this scope is relatively constricted; unfortunately, natural cycles and events always also contain forms of expression that can only be called life-threatening.

The question remains as to why something that basically relates to the world as a whole only manifests in this way at one location. One answer could perhaps be: Because the media reality of our age turns such single events into a consciousness factor for the entire rest of the world. After all, the pictures, the terror and desperation of those who were affected do not leave us detached; instead, they bring us into contact with the feelings and fears that such events would trigger in all people.

Why this happened on the physical level in Moore and not also in Berlin or Hamburg can only be shown astrologically through the precise time quality at the location. And, as so often, this is where a strong signum can be found in the event chart. Jupiter stands very precisely at the Mid-Heaven, and the principle of overdimensioning is also significant locally at this point in time as it dominates the current moment. So this could very much be an indication if we also consider another event chart: the development of a tornado that ravaged Moore in May 1999.

According to the official data, the Oklahoma Tornado Outbreak occurred on May 3, 1999. Even to this day, it is seen as one of the worst natural disasters in the USA. Within just eleven hours, about 70 tornados swept across Texas, Kansas, and Oklahoma. The strongest of them hit the small town of Bridge Creek and also affected Moore.Here as well, there was a Jupiter signum in the creation of the F5 tornado. This time together with Mercury on the DC of the event location. The Sun stands in the approaching square to Uranus and the Moon in Sagittarius is almost precisely in opposition to the Jupiter position of yesterday's catastrophe. And, strangely enough, the 1999 Saturn stood in almost exact opposition to yesterday's Saturn position.

A tornado also hit the small town and destroyed many houses on October 4, 1998. According to the data of the National Weather Service, this occurred at approx. 8:34 p.m. This time Saturn is on the DC and Neptune on the IC, but there was a Moon - Jupiter conjunction right before this. This may seem like some random factor, but the situation changes when the next tornado in Moore is calculated. On May 8, 2003 just before 5 p.m., a category F4 tornado once again destroyed parts of the town. Once more, the Moon is in conjunction with Jupiter; it is in an exact opposition to Mars and a somewhat more distant one to Neptune this time. Oddly enough, Pluto is now located exactly on the same degrees and arc minutes as those of the Moon on May 3, 1999 during the Oklahoma Tornado Outbreak. This type of transference can also be found in other areas; planetary positions in the one event chart are repeated in the other but the protagonists – the planets – change.

As so often, these are many individual pieces of information that are far removed from depicting a clear and distinct picture. Even if the emphasis of the Jupiter archetype is conspicuous and also makes astrological "sense." But in any case, this is a start and perhaps an encouragement for further investigation. At the end of which some clever mind will discover something that some years from now will expand the advance warning time for affected regions at the least to the extent that people can protect themselves from the immediate consequences. Yesterday's square between Uranus and Pluto will repeat another four times; only in spring 2015 can we hope that it will no longer appear – at least not in this form.