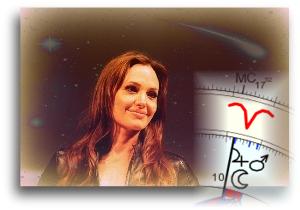 The story of someone who set out to simply cut off fate: Angelina Jolie has a Moon-Mars. This conjunction can be radical and even very, very radical when it is in Aries, with Jupiter, in a fire house, and stands close to the Midheaven to make matters worse. During the vehement transits of the Uranus-Pluto square across this constellation, the actress – as just announced – has recently had both breasts amputated. Because, as she says, she carries a "defective" gene that predestines her for breast and ovarian cancer – with a probability of 87 percent. Her Aries cluster is actually opposed by Pluto, which sometimes mixes genetic "imperfections" into a life. The problem: This Pluto cannot be simply cut off, even by sacrificing a woman's breasts.

After all, the Moon-Mars can be many things: highly spontaneous, self-injuring, and aggressive toward one's own feelings, but also rigid when decisions are required. In addition, the Moon-Mars drives out everything that is phony within an individual and others, as well as what lies beneath or covers the surface. And this constellation "smells" every form of Jupiter-Neptune wherever it may be, which it then must unintentionally bring out of the shadows. This is the case because Aries-Cancer reflects Pisces and Sagittarius. Actress Christina Applegate likewise has the Moon-Mars conjunction, but in Pisces; she also had her breasts (Moon) removed (Mars) as a preventive measure. Even though this only occurred when she actually contracted the cancer. Jolie's Mars in Aries is faster and takes more vehement action. She continued to work around the amputation, has become frighteningly thin, and even collapsed during a case of charity stress; but she continues to live her life as if nothing has happened. This may seem absurd from the human perspective, but it is comprehensible in astrological terms. Can such a fate actually be negated?

The answer is obviously no. There is just as little a chance of removing someone's Moon-Mars from the horoscope as negating its aspects. If something does not manifest like this, it will turn up somewhere else; depending on the position and conscious decision regarding certain forms of expressing a constellation, its consequences will also change. However, the pain remains the same either way when these hard spillovers touch people.

When Angelina Jolie effectively makes a "yang" decision (Aries) under the first sharp approaches of Uranus and Pluto through her difficult aspect figure and sacrifices her yin characteristics (Cancer) to greater security for the future, this can also be precisely seen as the death of a personal area that she is also right in very much fearing. She has undoubtedly sensed that a major danger is actually threatening under the influence of such transits. Life will be changed and revolutionized. The consequences cannot be controlled.

It is interesting that the actress addresses exactly this issue of controllability in anARTICLE in the New York Times: "Life comes with [many challenges.] The ones that should not scare us are the ones that we can take on and take control of." This is an almost naive attempt to maintain the decision-making sovereignty over her existence (even toward the conceivable death), which is typical for the side of her trigger constellation Moon-Mars. Both of them in opposition to Pluto create a virtually unbelievable susceptibility for feelings of powerlessness, especially when – as here – mother Marcheline Bertrand is the "starting point" of the problem. Jolie witnessed how her Taurus mom died at the age of 56 due to exactly the same form of cancer that has also been "genetically" prognosticated for her. At that time, Mars stood exactly where Pluto is now located and agitated Jolie's Moon-Mars from Capricorn. This is a trauma that she now takes into account with her "medical choice" (which is the title of the "justification" in the Times) as Uranus and Pluto in turn have much more vehement and sharper transits in the direction of the opposition Aries-Libra.

With Venus at the Cancer AC, Jolie is precisely the beautiful mother of many children that she represents in the tabloid press. But the Moon-Mars conjunction with Jupiter in Aries in 9 is also blanketed by an animus that is highly active and lives out the popularity factor in this horoscope to extremes. Pluto also means turning the self into a concept. However, the problem for such a strongly energetic approach to life is also found in the 12 Saturn that has been pushed aside. Disorders disrupt. Walls exist for the individual to overcome and not as determent. Everything in 12, except for Neptune – which stands very strongly in its own house – is easily suppressed. It is common knowledge that Jolie has also publically admitted her acts of self-mutilation – a not entirely untypical, early form of expressing Moon-Mars. Mars cuts, and the Moon is also the injured femininity in this case. With the origin – the IC – at a point of Saturn-Uranus, this situation is compounded by threatening sensations of inner conflict as the basis of the personality. What would make more sense than the attempt to actively face the risks if they cannot be controlled? Jolie's extreme lifestyle has long been legendary.

So if Christina Applegate – who has a much softer and gentler disposition than Jolie – has also subjected herself "prophylactically" to a breast amputation, this is likewise related to a fine sense for Jupiter's role in the constellation of Moon-Mars. It expands everything that has existed as a disposition (in her case, the square next to it). Depending on the situation, it may actually play a role in degenerating, proliferating cells. But seen in astrological terms, removing the "locations" of this tissue certainly does not avert the danger of problematic consequences due to difficult dispositions.

The simple example of unfortunate tooth situations under Mars-Saturn or a burdened first house may clarify how "a change of floors" can occur in astrological dispositions. We can have a bad tooth pulled out and suffer from a deficiency – of a tooth – from then on; in addition, and under the corresponding transits, it may be necessary to undergo protracted and sometimes painful treatments or even implant replacements. Or walk around without it and accept all of the social and physical consequences. If we leave the corpus delicti where it is, we must live with the painful accompanying manifestations until the tooth falls out on its own. In any case, it will hurt and the indicated "events" or the level cannot be avoided. Unless we dig deeper for the mental-psychological topics that are addressed here. Experience has shown that things become confusing with all of the attempts to overcome the uncertainties of specific situations as quickly as possible by controlling them.

Angelina Jolie already has the breast reconstruction behind her. She objectifies her decision (Mercury in 11 Gemini), which must be marked by panic. But the transits through Moon-Mars are just now becoming truly acute. How exactly they will manifest – whether subsequent surgeries will be necessary or the stricken Moon-Mars later expresses itself through an extreme, exaggerated will to live (with consequences such as affairs or directly through other psychological experiences of loss) – will also be determined by her emotional willingness for confrontation. Transits are windows of time in which we can look at very old problems and then reorient them. If we change the level on our own.

The physical forms of expressing dispositions or transits can only be toned down when we very consciously go to a different level of the inner consequences. This is almost always a perennial emotional issue that strikingly stands out, especially in astrology. Jolie's topic is ultimately not cancer as an illness, but her own role as a driver and her enchained and hidden Saturn that cannot be averted through countless amputations or beauty operations. This always involves the substance and not its symptoms. Astrology shows that it will not be easy for her either way.