Space – infinite expanses. The year is 2013. This is the adventure of the spaceship Bion-M 1 under Mercury-Uranus. It travels with its crew that includes 40 cichlids, ramshorn snails and algae to research the important problems of travel sickness, immune defense, and weightlessness. Many light years away from the Earth, an on-board aquarium advances into galaxies that have never seen a finned being before.

Something like this could be the beginning of a new series called "Fish in Outer Space." What is actually happening with this civilization? The first person in space was the dog Laika (English: Barker - but the yapping quickly turned quiet when she re-entered the Earth's orbit). And now the little swimmers have been called upon to serve as representatives. Incidentally, today is the "Day to Abolish Animal Testing" (previously: World Day for Animals in Laboratories).

The German answer to the Starship Enterprise in the form of Bion has already been circling in the cosmos for a few days. It was launched from the space station Baikonur, during the usability-hungry Virgo ascendant with Mercury in 8, on course to the universal astronaut indicator of Uranus. As a result, the fish (Pisces) are obviously also located on the descendent – which is where everything that can be observed is found. Me AC, you DC. Mission OmegaHab of the Stuttgart and Erlangen universities is not a joke and therefore does not deserve to be treated as public amusement. In one of the six international small satellites, which were sent up with the Soyuz rocket, left for the stellar boonies on Friday at exactly 12 noon (CEST). Sun, Ruler 12 (Pisces equivalent) stood with Mars just before Apex 9, the distant journey. The Scorpio House makes the current issue clear: systems. Like our Franconian aquarium, which now flies through space as the first closed eco-system in the world. Why? Because human beings (see Jupiter Lord IC, the "cause" of the starting radix, in 10), as significant as they are, do not have a sense for constricted horizons. Knowledge creates science: Feel free to watch and see whether the life of the little perches disappears during re-entry into the atmosphere. After all, they would have had it much worse as lab mice...

But other countries (other customs!) also immediately threw a few vertebrates into Bion - the aforementioned mice, geckos, or rats. In contrast, the German eco mission is relatively civilized. The participation of the little animals is already shown in House 6 of the radix, with which they are also classically associated. This is where Neptune swims – and Uranus in 8 is its field ruler. This is a nice astrological image for such an "important" astro-argo-nautical concept mission. Except that Neptune ultimately lets the everyday use become blurred in the house of adaptation. The Russian satellite program Bion -- which now carries the international experiments into weightlessness -- had been on a break for 13 years. But with Neptune in its own sign, not only the Russians are forced back into the experimental cosmos. After all, everything is on the line: knowledge. Mars Lord 8 Apex 9 on Ruler 12 Sun. The aim of the understanding is illuminated with initiative and strength. However, the two do not move toward 9 but boil down to one concept. Not the best star for the trailblazing results that were intended. Everything has just been established (9) and mentally fiddled into the system (8).

Yet, it is quite fascinating that even such a little horoscope can illustrate a small bit of human stupidity. Chiron on the descendent shows that the cichlids, as pioneers of research, deserve pain instead of sympathy. There are actually just very small fish in the square to Jupiter, humanity's big Manitou of the sheer superhuman penchant to comprehend the world and its sky. 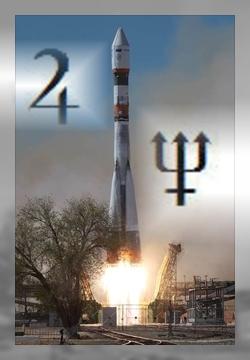 With such a Virgo and Gemini emphasis (utility and thinking!), the entire experiment obviously also revolves around the five senses. After all, Mercury as the Lord of AC and MC (astrological: What is the chart about and where is it going?) does not just want consciousness; Neptune in 6 also stands for the diffuse channels with which people make contact with the surrounding world before they encounter them in Libra: hearing, seeing, smelling, and whatever the rest are called. The travel sickness, about which the scientists hope to acquire more information, is therefore already present in the birth image of the launch. Because the fishonauts (incidentally, still in the larva stage – Neptune, which is also the stage BEFORE birth in Mars-Aries) have quite a similarity with human beings in the ear area.

In any case, the radix of the launch fits perfectly: According to REINHOLD EBERTIN and his degree correlations of the zodiac, Mercury at 9 degrees Aries points to the eye lenses, and the ears are found at 7 Aries but the auditory canal only appears at 29 Aries (where the Sun-Mars of the horoscope stands). The image is already unbelievable. The scientists already know that poor interaction of the eye and ear presumably cause travel sickness. Which must be researched at all costs. The equilibrium organ in the ear reports that something is wobbling, but if the eye cannot follow along this would even make the fish sick. Which is why cichlids should also not read in a moving car. Typical for Neptune in 6: no adaptation to the conditions of the surrounding world.

How and why all of this occurs is what Bion with OmegaHab should now teach the world. The astrologer recommends paying attention to the bad state during weightlessness since Ebertin comments that the nerves of the feet are located at the momentary position of Neptune (3-4 degrees). In addition, the aim of using the cichlid-onauts is to discover why the cells of human representatives in space change so quickly. Especially "ear stones" – important for the equilibrium – and bones and muscles. The Capricorn in the square to Uranus-Mercury calls out very loudly here. Laika, which was also called Little Lemon or Little Curl, is dead anyway (incidentally, the ruler was also a Virgo-Gemini AC-MC when she was shot into the cosmos at that time), and the cichlids also do not have much longer to live. Be that as it may: The Erlangen and Stuttgart scientists had to pack their entire eco-system of the aquarium into a tiny box before take-off. Size: like a crate of beer. One small step for a few fish, one giant leap for mankind. May the weighty mystery of travel sickness soon be explained. Bottoms up, wonderful science!