SOLAR CORONA - IS THE NEXT WAVE COMING? 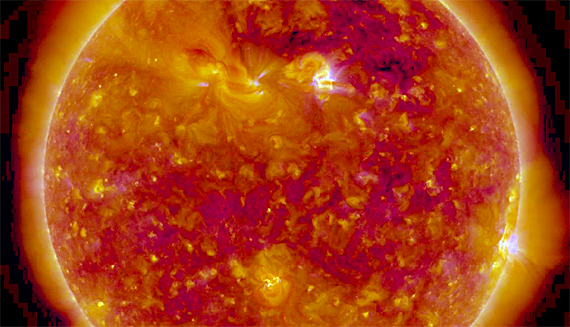 If somebody asked me today what I was most concerned about, the answer would be

Coronal? Yes - and for now it has nothing to do with our beloved corona virus, it's more about the current solar activity. In the past months there were hardly any remarkable outbreaks etc. in this direction, only in September 2019 and about 3 weeks ago our creator got a little more excited. But all this was and is at the moment still in the "green" range, i.e. below a KP-Index of 5.

But it will probably not stay that way.

In the past 9 years, we have published a number of extensive articles here on Loop! that have dealt with the possible synchronicity of current planetary constellations and solar flares. Below are a few quotes from these articles to explain the basics of our theses to new readers:

The connection between astrology and solar activity may seem far-fetched at first glance. Why should the activity on our giant mother star be influenced by the orbits or magnetic fields of its tiny companions? Legitimate doubts, but just as legitimate are simple observations that raise questions. 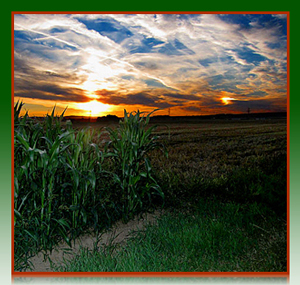 It is old hat that this reversal of polarity takes place approximately every eleven years and thus corresponds to Jupiter orbiting the Sun (11.86 years). And even skeptics can understand it in a certain way, because the largest chunk in the system is of course allowed a certain influence, even in the world of ideas of measurable quantities. But how then does the strange correspondence of the moon's orbit (sidereal 27.3 days) with the sun's average rotation (also 27.3 days) explain itself? Nobody would seriously think of a physical influence of our moon on the sun as the cause for this synchronicity. But serious researchers will probably not dismiss this as a coincidence either, more about this can be found in the corresponding articles, it is recommended to read through them again before continuing here.

Astrologically, 99.9% of all interested parties are still concerned with the geocentric world view. That means - how do we perceive the state of the planets from our perspective here on earth. If one is concerned however with the solar activity, then only heliocentric constellations have a meaning. And even the frequently depicted positions in front of our geocentric zodiac are only a measure of orientation, but say nothing about content. But this does not play a big role in relation to the constellations and aspects of the planets among themselves, here it is actually only about the distances to each other and also to the sun itself. But the latter is not always easy to include in an interpretation, as are the declinations. But all this together only results in conclusive pictures, from which one could then "foresee" possible developments. Not only as an astrologer, but also as an astrophysicist or astronomer. 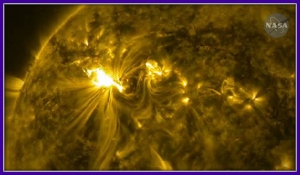 During a quick visit to the stations of the largest solar storms since the first observations, you will repeatedly encounter similar constellations of declination and right ascension. They prove the usefulness of using a double astrological dimension when observing sunflares. Just a few examples:

May 1921: "New York Railroad Storm" -> Mercury OOB, Mars on the border, both in conjunction, Jupiter-Saturn parallel plus conjunction.

Why this could be so important should perhaps also or especially in these times of crisis. If a solar eruption really should occur in the highest regions like in 1859 and the winds triggered by it should head directly towards Earth, we have to expect far worse coronal effects than those caused by the current corona virus.

Because then there would be power failures in large parts of the earth due to an overload of transformers and transformers. And these damages could not be repaired within a few hours or days, but it could take months, if not years, until a normal power supply could be restored in these affected parts.

And a life without electricity would be a real catastrophe for us, because then nothing would work anymore and all the structures that govern our daily lives would collapse. Compared to this, the often lamented current restriction of life by demanded discipline and the wearing of protective masks is only a small joke. And it would also no longer be possible to relieve one's own frustration with conspiracy theories, because would please be able to control the sun's activities?

Why I am publishing this at this time of crisis during the second corona wave has a simple background: I hope that it will be read by politicians and scientists who at least have an influence on possible precautionary measures in our country.

Because - we are currently in a new constellation that has not existed in this form for a long time.

Firstly, there is the current Jupiter-Saturn conjunction on November 2. This means that the two largest and most massive planets in our solar system are at the same point at least in terms of ecliptical length.

But that is by far not all. Opposite them is the planet Venus, which is on the other side of the sun. Venus is not nearly as massive and large as Jupiter or Saturn, but it is many times closer to the Sun, which at least partially compensates for this discrepancy. 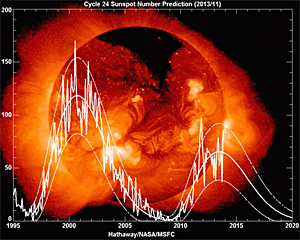 Calculating the time spans between two conjunctions of Venus and Jupiter from a heliocentric point of view over a period of 100 years always shows the same thing. Every eight months this conjunction is repeated, a new conjunction takes place. In this context it is interesting to note that the 16-month heartbeat of the Sun is a complete cycle from peak to peak. After eight months, however, the reversal of the respective development already takes place, either towards greater activity or the opposite. The eight-month Venus-Jupiter cycle thus depicts these points of intersection (LINK)

But even the latest discoveries find a counterpart. Just under a year ago, a group of scientists published a study according to which a reversal of the zonal magnetic field occurs every 40 years (LINK). A nearly four times as long phase, as with the present Pole Jump. And also here one finds fast - Saturn and Jupiter, the two largest planets, are every 20 years in a "great conjunction". And again, the time period is displayed after the development is reversed, from the "trough" to the "crest" of a sine wave or vice versa (example: conjunction on 16.04.1961, next conjunction on 16.04.1981)

Question: When was the last time that there was this, i.e. an almost exact conjunction of Jupiter and Saturn with a simultaneous exact opposition to Venus?

Answer: exactly 119 years ago. However, this is still not all that comes together this time. Because currently Mercury, Earth, Mars and Uranus are squared to this opposition. And since Pluto is also close to Saturn and Jupiter, all planets except Neptune are included in this so-called current half-square. 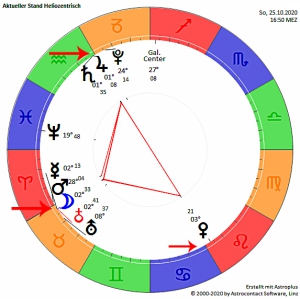 However, luckily this eruption was directed towards Jupiter and Saturn. Relatively exactly at the time when the earth was square to them.

Now it remains to be seen what will happen if Mars is included in this accuracy. However, this will only happen on October 31st, when Earth and Uranus are in an exact conjunction and the great conjunction of Jupiter and Saturn only needs a few hours until it is also exact.

So there is still a lot to come. And if I were now responsible for the energy supply of our country, I would declare a red alert. This should include the possibility of shutting down all the transformers and transformers in our network within a few hours in the event of a possible upcoming eruption, so that when the effects of this eruption reach our Earth, the system cannot be overloaded.

If necessary, this may even be combined with a temporary shutdown of the general power supply during the hours in which the impact will occur. It is better to wait a short time by candlelight and without internet until it is over than to end up in complete chaos in the next months.

Of course I hope that these fears will not come true. Or at least the coming outbreaks will point in other directions than our own. But in any case, those responsible should prepare themselves for the fact that such a day X will come sometime. And perhaps the simple astrological model could help to prepare for it in time so that the effects of an X eruption can be mitigated. 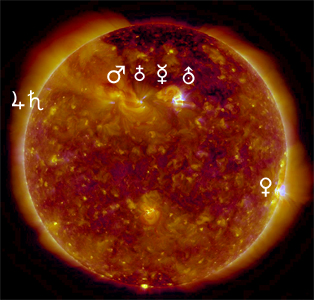 Until then, if it doesn't happen now, it would be very helpful to finally include this astrological approach in all research to find out what is actually useful for it. But this research needs to be extended, because the cosmological system is much more complex than it is presented in conventional astrology. There are many new approaches that should also be investigated in order to get a holistic picture that could really make fairly accurate predictions about future eruptions possible.

If you want to know more about it, here are some more links for live observations:

Astronomical websites on the subject:

MICHAEL ERLEWINE - ONE OF THE PIONEERS IN THIS FIELD

BRUCE SCOFIELD - NATURAL ASTROLOGY: THE CYCLES OF THE SUN