Venus in a Fever: The Wave of Separations

It is intense this time: All of them are suddenly doing it. Relationships are apparently falling apart more easily than ever right now, and the reason for this can be wonderfully seen from the astrological perspective: When Venus transits through its sign of Libra (which represents the public sphere, relationship, gossip, and celebrity, among other things) there is also always abundant news in view of the eye-catching couple stories of the celebrities. But during this year, when Venus – traditionally described as such a harmonious indicator of encounters (a major misunderstanding since Venus can be crystal clear and hard as steel!) – breaks into the cardinal square of Uranus and Pluto and virtually provokes it at the moment, the primary motto is: separation.

There is a new report on this topic every day. Venus in the spiritual start-up sign gives a powerful push to initiatives and such bulletins. Catherine Zeta-Jones and Michael Douglas (born on the same day) are momentarily leading the charts, accompanied by Western Sheriff Eastwood and Dina Ruiz, and Google luminary Sergey Brin and his long-time love Anne Wojcicki are making headlines with the end of their relationships. After 14 years of marriage, Monica Bellucci and Vincent Cassell have also proclaimed: This is it! Quite a bit is suddenly washing up. All of this is very easily visible and understandable from the astrological perspective.

Douglas and Zeta-Jones fell in love at first sight back then. Libra clusters unbelievably in both charts and once included a Sun-Uranus (hers) with a Sun-Neptune (his). Above all, when these conjunctions of longing and unpredictability (put into simplified terms) touch everything of rank and name among the slow-moving planets, then there is much too wide a gap at some point. They should move forward together. But unfortunately, this is always the most difficult thing. So, during Uranus-Pluto with Venus on her Mercury and his Saturn, the separation news must come out. Things are no different for the other couples. But this is not the end of the cuts: It has now been announced that Siamese twin boys were recently successfully separated in Dallas (precisely during mundane Venus square Pluto). A truly strange pattern of time! 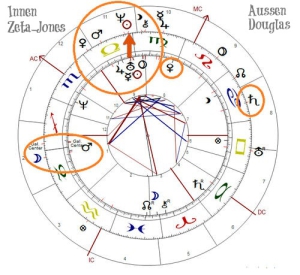 Love is made in heaven – separation in hell. This is one of the clichés that people like to resort to in their frustration. Yet, the Cardinal Cross – which all of us have somewhere in our horoscopes – already describes a relationship pattern in a very general way. Libra is harmony, Aries dispute and passion, Cancer is feeling, and Capricorn is the practical reality to which we must submit. Douglas and Zeta-Jones found each other in 1999, as Pluto stirred up her Virgo-Venus and Uranus his AC-DC axis. He discovered a personal Uranus on the outside, in the world. This woman was beautiful, wild, and dangerous since she has Uranus-Sun in Libra.

At that time, both of them have Neptune trine to their conjunct Suns – and paradise seems to be a heartbeat away. Unfortunately, the following period of time shows how a person really lives what appears to be such a promising ancient human longing. If this is later joined by a massive mundane constellation, what can never be found as true and beautiful on Earth as suggested by Neptune in dreams crumbles bit by bit.

Neptune has barely transited her Venus when her wishes for a relationship have taken on unearthly dimensions again, and both experience the extreme heights and depths beneath the grand cross. He gets cancer and overcomes it; she outs herself as manic-depressive (the more difficult pole of the fascinating effervescence of Uranus on the Sun throughout a lifetime). This does not sustain the heaven on Earth that both of them had imagined. In the Davison Relationship Chart there's a Sagittarius-AC and a Gemini-Mars, also under a Neptune square (seeking a myth!), and Venus, Sun, and Mercury in Aries in 5, where the major battles rage in private because such a great amount of energy and power is involved in the mutual nature of the relationship and wants to be released.

If this corresponds with a mutual goal, things are wonderful. But if it turns two people against each other, the entire interaction also erupts in the radix pictures. Here as well, in the Davison Relationship Chart, Uranus separates out what is actually still rubbing together with the Pluto glue in 2. But Pluto squaring all of this Aries power also brings precisely these deepest implosions for the couple. If both people do not participate in the bidding and, if necessary, also go for the hundredth spin through the emotional River Styx, they can only tear themselves away from this. Because the overall process is very exhausting – and the sensitive Libras do not like that at all.

In the Land of Falling Myths

The images of each other collide. The myths into which people have made themselves plummet into the narrowness of this little planet and its hard realities. What Zeta-Jones and Douglas get from each other – without even wanting to – is not only the core of the nature (Sun) but also the core of the problems (Sun aspects). Like two chisels that are extracting a figure from within the other person. She initially gets from him the saintly lover with Neptune manna – and then the loser who always just searches and cannot translate his images into earthly reality (except in films). At first, he gets from her the wildly independent superwoman with Uranus magic; this is followed by the one who simply does not have any consistency but is just extremely attractive yet completely radical, coupled with annoying breaks and leaps here and there or even back again. The worst part of this is that they are much more distinct with each other than on their own. A man who agitates within her nature and vice versa. This unnerves both of them. When it becomes clear to both of them that the desired film of merging actually just takes place on screens, the matter becomes seriously brittle. Then they staunchly weather it out. Or break it off if – as in the case of Douglas – the otherwise enduring resilience of Saturn is battling under the thumb of the transit at this time. 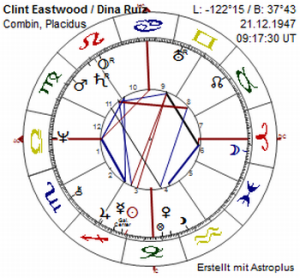 For these two people, the massive transits to the synastry and the Davison Relationship Chart clearly show that the entire relationship (with both radix pictures) has become unhinged by them. The situation appears completely different for Eastwood and his much younger wife Dina Ruiz: The partnership itself carries the major burden and the man – Clint, the tough legend – bleeds more at this point. His planets are the most affected – just like the Davison Relationship horoscope of the couple (right), through whose AC-Neptune conjunction the "blessing" of Uranus-Pluto goes and many things break apart. Here we can also see the mythologization of the relationship per Neptune in the disposition, which is always accompanied by the danger of too much remaining unsaid or unconscious when the hard transits of transformation come (Pluto or Saturn) or when the relationship subtly or directly develops a trend toward the fleeting with Neptune and Uranus.

It is conspicuous for this very different couple that mainly Eastwood – the womanizer who is now 83 – now still has the difficult transits. In their synastry, his natal Venus-Uranus-Saturn square – which has always made a big splash with the ladies – is chronically spun by Dina Ruiz's Mars, who is still shy of 50. That may feel wondrously refreshing for a while. But, depending on the circumstances, she may want more from the relationship (Mars is in Libra) than the aged man can give. However, her Neptune on his AC turns her into his enigmatic riddle in a certain sense – and this constellation tends toward platonic bonds after a while.

Her Sun also illuminates Eastwood's Pluto and brings up power questions and the necessity of development within him, which is why he then likes to control her. Although she already completed the transits of Uranus and Pluto through Mars a while ago, he is still in the middle of them. We can assume that she became increasingly discontent and he must still cope with this.

Google founder Sergey Brin and Anne Wojcicki are both Leos and apparently already grew apart some time ago. This alienation may have already occurred at an early point in time when the cardinal climax with Saturn, Uranus, and Pluto ran into an early Venus-Pluto conjunction (he has Venus-Pluto and she has Pluto on it) in Libra. Now she has Neptune opposition Virgo-Venus (with a radix Neptune square) – which is incidentally at the same spot as Zeta-Jones – and he has a new significant other. The problem has only become public now (with the announcement of the separation), as Mars activates their synastric Leo-Sun (hers) and Taurus-Mars (his) square and creates facts. Incidentally, Google has the jitters. If they get a divorce, what about his shares? This also reflects the fixed field of conflict.

But this is not yet everything in terms of separation under the ramble of Venus through Libra this year: Everything is also over for Monica Bellucci (RADIX) and Vincent Cassel. She recently has left the transits of the square through the Libra-Sun behind her, and now the Leo-Moon-Mars is confronted with reality by the Saturn square. He (RADIX) is still under the influence of the difficult transits close to his Aries-Moon, which will continue to have restless times for a longer period of time at 13.5°.

And then there are still the two tiny boys: Owen and Emmet Ezell are 6 weeks old, born under the water-trine. They were fused at the chest and shared a liver and colon until the mundane Venus-Pluto square. The Siamese twins were separated last weekend after a nine-hour operation. As Venus moved into the Uranus-Pluto birth square. Everything went well. So the departure from the old situation can also be very different: For the one person this is a cosmic drama, and for the other it is the beginning of an entirely new life. Uranus' conflicting nature, into whose domains such breaks fall (after all, Aquarius follows Libra as the last air sign) are an exciting but strenuous astrological classic in this regard...