Venus Saturn: The Power of Money 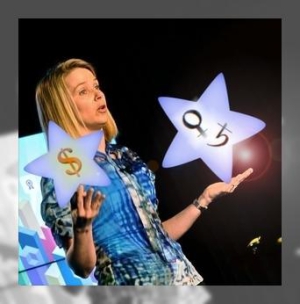 Is there a tycoon aspect?

Marissa Mayer is very rich. And Marissa Mayer is very young. The Gemini woman with retro Mercury has Venus-Saturn in the radix, a branding of stable money. She has not just been considered a czarina of success since it became public that the talented and innovative-hungry computer scientist receives an astronomical annual salary of 36.6 million dollars for her job. Of which the majority is in stock. With the Saturnine signum, manager Mayer splendidly fits a pattern that is significantly shown by nine out of ten of the richest billionaires (top of the current Forbes list) in their horoscopes. On the heliocentric or geocentric level. Such a clustering is very unusual.

Even more clearly than on Jupiter’s team – which is certainly equated with abundance – the super-rich stand on Saturn's shoulders. Marissa Mayer with her very promising conjunction may not yet sit in the sacred halls of the genuine Scrooge Mucks. But the woman, who was just bought over from the Google team by Yahoo last year and is now making headlines with the top remuneration, is already on the best path. It is already assumed that she will be one of the ten tech leaders of the future. But this is no surprise with a proper Mars-Jupiter in Aries. Which she incidentally also has in common with the richest man in the world, Carlos Slim Helu.

That mega initiative also makes mega money is far from obvious. But those who have Venus-Saturn can apparently hope for concretization of their talents. Because Saturn and Venus materialize things. Here are the corresponding links of the top tycoons on the list of the richest with their full treasure chests:

The only exception in the top ten is David Hamilton Koch, who is listed with 34 billion like his brother Charles. Although he has Saturn in Taurus, this is unfortunately not sufficient for the money signum as a generation aspect. But behold: He has a Taurus Sun in conjunction with Saturn. This is hardly a surprise.

It is conspicuous that conjunctions and oppositions and/or the connection of Venus to House 10 (or the House-Ruler variable of the aspect) play such a strong role. Money as the foundation of personal values. All of the minds (right inside radix Slim Helu, outside Mayer, geocentric) are known to be especially hard-headed. For example, Marissa Mayer with the conjunction in Cancer, was recently stone cold in cancelling the home office of all things at Yahoo. It had also been intended to also make it easier for women with children to work from home. Whoever does not want to come to Yahoo during working hours can leave. She personally marched back into the office two weeks after the birth of her first child. And immediately set up a nursery with a nanny right next to it. Those who have plenty shall have more.

This can also be Venus-Saturn: The absolute curtailment of the means and self-discipline to the boundaries of reason. And an enormous amount of work. Those who do not heed this approach may also experience the aspect through much poverty at times. Without self-denial, there is also no money. This is bitter, but can be clearly understood in astrological terms. Saturn, the God of the Golden Age, is also responsible for self-limitation and formal functioning. Those who structure themselves will earn. Then the world sometimes opens up like a vault, which also releases its material treasures. Then the astrological analogy fits perfectly: Saturn is the image of meaning, weight or even proportionality. It has a tendency of occupying the upper levels in all hierarchies. Venus contributes the standards and values on the spiritual and material level since it astrologically represents every substance. For example, this also applies to money since it is considered to be the symbol of survival and self-securing (Taurus), as well as for the popularity of a person's self-conceived value standards (Libra). At the start of the horoscope, there does not seem to be a simple connection between them. People with this signum must be able to live modestly if they want the trophy. As in everything that Saturn puts its mind to, the aspect can make someone more rooted and fruitful over the years. But this only applies if all the rules of the game are followed. Otherwise, Saturn becomes a regulator. Venus-Saturn is a burden since its carriers are caught for every violation of the law much more frequently than simply by random chance. And they need time to bring in the harvest.

That Marissa Mayer – the shooting star of Google (she was its 20th employee, practically from the garage period) – has already received so much wealth as a young high-flier in just one year, is also presumably due to the Aries emphasis that connects her with Carlos Slim Helu. And with Jupiter, which triggers the aspects. In addition, they both have Mars-Jupiter in the radix; it also stands in almost the same place when inverted. The richest man in the world originally came from rather poor circumstances. His father was a Lebanese but moved to Mexico as a boy and created the basis for the son's later money with a store named "The Star of the Orient." As an Aquarius, he had many unusual ideas (such as Marissa Mayer with her Aquarius Moon) and also developed a knack for business at a very young age. Both of them are suited for the area of communications with their Uranian talents, which they use in a very active way. 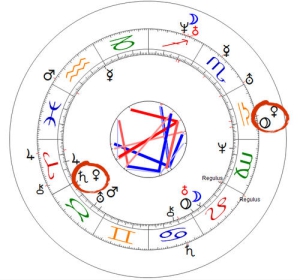 But a good nose for networking is not everything. In order for it to manifest as money, both strong implementation qualities and intuition must also exist. But the realization and – above all – the stabilization of the money projects can be found in the signum of wealth: Venus-Saturn and Earth on Earth. The second field, which symbolizes the practical level of securing, must obviously be on good terms with its rulers. This can be assumed for Slim Helu and Mayer (the heliocentric radix pictures are on the left with him on the inside and her on the outside), even if the birth times are missing.

In addition to Venus-Saturn, it is also necessary to have Pluto as the Lord of the Taurus axis's other side – Scorpio – where "other people's money" is traditionally located. This requires a good dose of Neptune. But it should be supported so that it does not show itself in its negative polarity as the tendency to just run after deceptive dreams or sell illusions to others. Consequently, the Venus-Saturn conjunction is heliocentric to Venus-Pluto in Libra sextile Neptune for Marissa Meyer. Otherwise, her radix displays a Sun-Neptune opposition with a willful Libra-Pluto trine (ruled by her Venus-Saturn conjunction). The Mexican tycoon has a Pisces-Venus that is ruled by Virgo-Neptune, which serves well in everyday life. In heliocentric terms, this becomes the extensive close conjunction of a super Venus-Saturn (in Taurus) in the square to Pluto. It supports Neptune in the trine to the value-creating Taurus-Mars. The heliocentric Venus-Saturn positions from the perspective of the Sun reveal the outstanding significance that such an aspect can reflect – measured in cash for the mega-tycoon with helio-Venus in the personal sign far beyond the value of the "worldly" geocentric view.

In any case, a strong tendency toward collecting dollars on the Sun and Earth level can be found in both of them. Very similar dispositions are conspicuous in many top members of the billionaire club. One example is Bill Gates with his birth picture conjunction of Venus-Saturn in Scorpio (which also shows the relationship to money through the sign), in the square to Pluto, and the balancing sextile to Neptune. And finally, this always includes a warning for those who will now comb through their radix pictures for a Venus-Saturn and already see themselves as future participants in the billionaires club: Even in astrological terms, one swallow does not make a summer. The linking of all supportive factors is ultimately the key. Even if outstanding money events rarely seem to occur without underlying protection of Venus-Saturn. Above all, organizing good fortune (Jupiter-Saturn) requires the reality of the Capricorn components. Or: Only what we hold onto stays with us.