The Lion Queen: Everything in Nothing 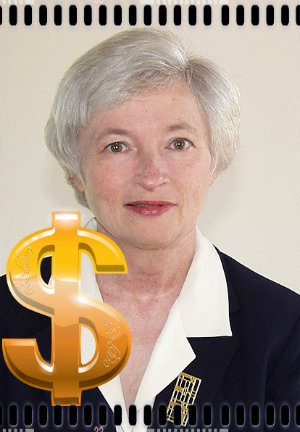 Rescue of the Financial Markets?

People say that she is very, very short and Janet Yellen is supposedly overlooked at first wherever she appears. There must also be tiny Leo-Suns that often compensate for lacking body height through surprising dignity and a confident appearance. Above all, Yellen's notorious, highly intelligent and academic approach to the world – with the force of a probing analytic Mercury-Uranus-Pluto in fire and a strategic stellium in Libra – is currently in demand. Which makes her new task seem logical:

The Lion Queen in the Country of Nothing, which is internationally called the "money market" and means everything by now. Such as the ascent and demise of many. The Neptunian-Uranian playground where sandcastles are currently collapsing. The male Leo searches for the female Leo and Obama nominates Yellen as the first female head in the history of the US Federal Reserve, which is just 100 years old, due to the threatening national bankruptcy. The petite lady, who is married to Nobel Prizewinner in Economic Sciences George Akerlof, is needed as the rescuer of a situation that has been exhausted to the utmost limit and in which the astrological Pluto-Saturn reception is in a clinch with Aries-Uranus.

With Neptune on Libra-Venus-Mars, she is actually mentally made for giving the seriously shaken Federal Reserve System – which vacillates between air bubbles and earthly demands – a theoretic happy ending at the least. At the same time, the difficult story of virtual money in America (and also globally due to interconnections) began with precisely this Fed back when it took control in America. This occurred in 1913, under the Capricorn-Sun opposition Pluto and an almost unaspected Uranus (square to the Moon is still under suspicion) as the riotous subtenant of the absurd in the eternal search for the stability of values. In its cosmos, money is just an expression: the symbol for safeguarding.

Yellen and the Fed place a doubled Venus and Uranus in close aspects on top of each other. Which means that the principle of Uranus (virtuality or abstraction) is coupled with the principle of Venus (money or value), which are already in antiscion in the zodiac. After all, this is where the myth of Aquarius serves to operate the button in the upper row of signs that is then expressed as the logos of Taurus in its effect. The one is the shadow of the other, foldable over 0° Aries. In other words: hard, earthly money (Taurus) as a consequence of energy application (Aries) also symbolizes the division of existence (Aquarius) as a result of wholeness (Pisces). With Venus-Uranus, the topic of "fiat money" now flies into the room and makes the momentary crisis possible in the first place. "Fiat" is Latin and means "let it be done" or "it shall be...!" Whatever: "...light!" or "...everything better!" Fiat money is money without any value of its own, which is the basis of inflation and the borrowing of capital. Central banks work with it in the unreal cosmos of the Uranian. Janet Yellen's announced job has now dovetailed her with the Fed's history in this respect. Uranus is now precisely in the antiscion square to the Fed-Venus and Yellen's Uranus. This does not exactly mean that heaven will break out on Earth when the two of them come together. Even if things should get brighter in the chaos.

When the Fed was born (at the right, noon positions), it was considered clever at the start of the last century to have an ideal, endless propagation possibility of "real" money that could help rescue the fragile economy. The virtuality of the dollar (and other currencies) created an expanding number of credit possibilities and an almost boundless amount of expandable "nothing": fiat money instead of real money, which still must at some point be exchanged for the corresponding counter-value and therefore blocks these possibilities. Venus and Mercury are in Sagittarius, where the borrowing principle is rooted and there is always a search for what is distant – which is why "deferred" solutions are preferred. As long as something is not real yet (after all, the result first comes in Capricorn or with Saturn), people are allowed to believe and assume and experiment. The sensitive, overwhelmed economy fully exploited the principle of hope at that time.

Which could be called a trick. But the Federal Reserve Act ultimately created the comprehensive possibility for increasingly vehement devaluation following one of the greatest financial panic-attacks of the era, which is now repeating itself in a certain sense. America stands in the focus of national bankruptcy, and the Fed has the exact Chiron return in Pisces that is appropriate for this time. So the wound of the illusionary in reality is festering, and a new head like Yellen is expected to provide fresh impulses – even if they are not new enough for many people. Because Janet Yellen has already found her sphere of activity at the Fed before. She is familiar with it because since 2010 – following the cardinal climax of Saturn, Uranus and Pluto through the Fed Sun-Pluto and through her Libra disposition, which stands in the square to it – she was already the Vice President of the Federal Bank. Both share Mars-Neptune, which is a closed system of the nameless that kick-starts initiatives and produces redundant starts. This is good when it runs and runs in a constructive way and bad when no one actually knows how to stop the giant ferris wheel.

The dominant, analytic pragmatist is actually the president's second choice, even if she fits the Fed like a key in a lock. Obama had intended on having the Sagittarius Larry Summers, his ex-economic adviser from the Harvard corner who – like the Fed (opposition) and Yellen (sextile) – has the tycoon signum of Venus-Saturn (Loop!ARTICLE: The Power of Money). But it is more strongly present in his conjunction than that of the potential workplace and the second candidate. However, Summers as a smart financial juggler could not be asserted politically and therefore withdrew from the debate even before his Saturn return and pending Neptune square to the Sun. What he will now do is unclear due to the Neptunian transition and hopefully not located at the negative Pisces pole. 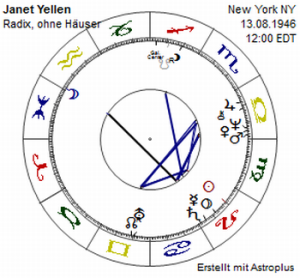 On the other hand, Janet Yellen, "Mrs. Moneymaker," is considered to have a completely different caliber. Anyone reading descriptions of the person who may soon be the most important woman of the financial world will immediately think: Virgo! Inconspicuous, pure, quiet, shy, teaching at America's most important universities, and having gone through all of the schools in the financial world. A person who is by no means the lustrous Leo that her horoscope shows at first glance (without the houses!). Which in turn reminds us how immensely important the axial system is astrologically as the employed "software" for a human being because it shows the practical implementation of the "hardware" disposition in reality much more clearly than just the positions in the signs. When they are isolated in this way, they do not manage without knowledge of the earthly expression.

Fortunately, Yellen's missing birth time allows the presumption of earth at the AC since – for example, in Virgo at the rising sign – the Sun would slip towards 12 (the "secret," decentralized Leo disposition as the field in the background) and Venus-Mars-Neptune and Jupiter in the mental Venus sign would go right along into field 2. Into the house of substance, the material, money, and security that Yellen wants to and should preserve, even if they have long stopped existing in the unclear and unreal flip-flops of the markets. That she has an AC in water or earth is also supported by the horoscope of her husband George Akerlof (*7.6.1940 with nine factors in earth-water), to which a strong personal bonding force must exist somewhere in her natal chart. 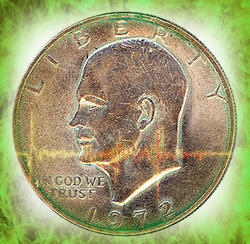 Whether Yellen succeeds in the task of preserving and safeguarding that people seek in her is an entirely different thing than her undeniable suitability for virtual areas. After all, bringing back artificial money markets – which are no longer comprehensible for normal mortals and only exist due to their abstractions (Uranus) – from their virtuality is not her job. As the top manager of the Fed, she must balance the completely out-of-control mechanics of loans, debts, and new speculations that have ultimately led to treading on the thin ice of financial theories with the non-existing real underlying values and claims. But the control of such processes always requires earth and water (above all, Taurus-Scorpio and Cancer-Capricorn). Janet Yellen's Pluto may be extremely concept-fixated with Mercury, but she has zero earth and zero water (unless the Moon were to be located in Pisces) to offer as intrinsic elements in the natal chart. Such a force of fire-air is rarely found in a birth picture.

So she will presumably also just have what the markets have always used to pull themselves from the claws of reality: new ideas, new methods, and creating more nothing from a bit of nothing. Leo is the creator of the zodiac, and Libra is the strategist. With nine (!) factors in both signs, the new person in the kingdom of the Fed – which affects the entire world and not just America – absolutely does not lack these very special, theory-related qualities. Which equally applies to the focusing that Mercury-Uranus-Pluto already bring with them. Whether no earth whatsoever in the disposition can actually force compensation between the Uranian and Venusian (from the material Taurus area) is very questionable. Since Yellen stands under the Saturn square to her Leo planets, their existence demands incisive measures. At best by practical/consistent implementation into absoluteness, but in no way once again just through new or different fiat money or its inflow through fresh channels. The Capricorn-Lord only tolerates real value creation with earthly underlying values; it otherwise restricts those who trick it in a Jupiter-like way. We would like to wish Janet Yellen the foresight that such limitation simply requires. Or: Things get brighter, but not "somehow better."

If this thought becomes clear to the recently nominated new head of the Fed because she understands that now is not the time for expansion but restriction, she will not involuntarily be used as a further footnote of history as she is faced with a still threatening Saturnian-based collapse of the system. Which not only suggests Pluto's Saturn reception squaring Uranus at the moment but is also reflected splendidly and unfortunately, even dramatically, as the battle of substance with wild knee-jerk theorems. The world has overstretched itself in the point of virtuality and now searches for a boundary. It can either find it on its own – whether tragic or not – or be found by the boundary.