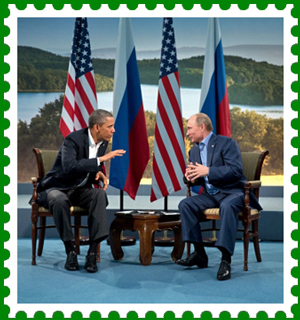 Who really rules our world today -- the opinions on this are deeply divided. The ages of a Sun King, the idealization of the Leo archetype, are over. Uranus now rules in the form of countless groups, organizations, and communities that often operate behind the scenes. However, an official poster child of this development can still be found in the meeting of the powerful at the G8 summits. This is what occurred at the start of the week on June 17 around 3 p.m. as the political leaders of America, Russia, Germany, France, England, Canada, Japan, and Italy sat down at a little round table to solve the acute problems of the world.

Why China is still missing in this circle but the EU is represented multiple times is probably due less to the significance of these states than the old political reservations. Nevertheless, an astrological glance behind the official facades seems like a good idea. Who are the men and women governing our world, who gets along with each other – or not, and, above all: How are they involved in the current topics of our age?

Russia’s President Vladimir Putin will be allowed to go first. As can easily be recognized in almost every photo from recent weeks, Putin apparently has a permanent bad mood. A Sun-Saturn conjunction obviously cannot be expected to be the life of every party, even if the Sun is in Libra and has a Neptune-Mercury conjunction at its side. But power weighs heavy on his shoulder during these days. This situation is compounded (in the course of Saturn's transit over his Scorpio-Venus) by the divorce from Lyudmila, his wife of many years. And all of this could possibly get much worse.

Putin is one of those individuals who are also personally involved in the ongoing Uranus-Pluto square. His Sun, together with Saturn, is now increasingly coming into focus; in addition, the current Saturn is wandering back and forth on his presumed AC. He appears to be quite intent on assuming the Pluto part in the spirit of the times during the coming weeks and months and is now on the best path to once again tearing open old divides.

Unfortunately, the glance into the immediate future does not reveal any changes in this respect. Quite to the contrary: The pressure will increase. There are too many tension aspects at one time, together with the related possibilities of projecting personal problems onto others or even the entire world.

This is the crux for people in responsible positions: If they are not integrated into the mundane current events, they are usually also not capable of truly understanding the associated challenges and finding the corresponding solutions. But if they are integrated (for example, through transits on the radix positions), then there is always the danger that they comprehend the connected tensions only as a result of their position of power and completely ignore the personal requirements.

However, only both of these factors result in a politician of true stature: the connection with and understanding of the current time qualities, as well as the willingness to personally bear a part of this "cross" and correspondingly change oneself.

Seen in this way, there is still at least the hope that Vladimir Putin will change from Saul to Paul in the course of this process and that his momentary attitude of refusal and drastic measures against dissidents are only the expression of his own helplessness. This often becomes apparent at the start of such processes.

In the course of this development, Putin’s relationship to the American president appears to be increasingly chilly. Although the two of them are joined by a very precise Moon-Moon conjunction, this extremely symbiotic connection is now suffering from the current Neptune square. An individual's own insecurity, which is often associated with it, can be very easily projected on the respective other person -- which quickly leads to a climate of mistrust. Unfortunately, this will continue until the start of 2014 and fits in wonderfully with the coming large square between Uranus, Pluto, Jupiter, and Mars. Above all, this will probably give Putin a hard time.

The only thing that can help here, even if the prospects of success are limited: Taking measures to build trust. Obama has made a start with his disarmament offer, but he should not hesitate to raise the ante.

We have already written much about Obama (links at the end of the article), but it may still be remarkable within this context that he is apparently wildly determined to assume the Uranian part of the square. The mundane trine between Uranus and his Sun also leaves him few alternatives, even if he is restricted at the moment by the simultaneous square of Saturn to the radix Sun.

Putin as his counterpart – who with Pluto on the MC and Scorpio AC obviously corresponds with the Plutonian part of the mundane square – will not be so easy to convince that innovations are also in his best interest. Above all, this applies if there are no economic offers that take into consideration Putin's problems in his own country and offer help in their resolution.

Angela Merkel sits between the chairs of Russia and America. There are also enough basic statements about her on Loop! (links at the end of the article). Her role could and should be that of a mediator. She is connected with Putin at best by a Mars-Mars conjunction in Sagittarius, which could casually also be called a man-to-man friendship. But this has a potential for new beginnings with the mutual Sagittarian orientation. Unfortunately, Jupiter (as the ruler of Sagittarius) is located in completely different correlations (Taurus and Cancer respectively), so it is not so simple to trim it to a common line.

In addition, Angela Merkel is also under pressure from Uranus-Pluto; Jupiter and Mercury are becoming increasingly involved in the time square. She is also accused of the proverbial Cancerian crabwalk (two steps forward, one or sometimes even more back) in the figurative sense. The vision is often just limited to the immediate environment, the homeland and her own country as an expression of "family." Those who do not belong to this must deal with their problems on their own. 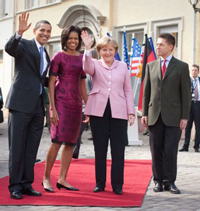 Yet, with a Sun-Uranus conjunction she would also have the disposition for introducing true innovations – even if this would always remain a moony Cancer matter in which much depends on her own mental state and mood. We can only hope that the coming Jupiter transition will bring new perspectives with it and also the necessary power for subsequently implementing them.

However, as a mediator between Obama and Putin, she always has a hurdle to overcome: Both of them position their Saturn in tension to Merkel's Sun-Uranus. One of them (Obama) is in opposition, and the other (Putin) is the square. The individual's self-confidence suffers here, even without anyone actually expressing any personal criticism. And if this tension (as is often the case for people with a Cancer emphasis) is taken too personally. But if the tables are turned, this person is very much capable of bringing movement to the rigid "reality" of the two presidents. However, this requires true inner greatness and only succeeds when this person is absolutely authentic as a sunny individual. 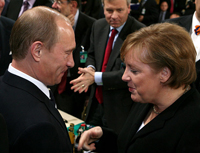 Yet, Angela Merkel would not be the Mother of Germany if she did not allow herself "moods" every once in a while. The best example occurred in recent days. For the first time, she had the exact square of Uranus to Jupiter and was allowed to listen to the charmingly expressed scolding from Obama. We can be certain that it did not fail to leave its mark on her – not under such a transit. It is possible that more has been set into motion than just fleeting sensations. This also expressed itself two days later during her visit to Russia. An argument almost occurred when Ms. Chancellor wanted to cancel the mutual visit to an "exhibition of looted art" with Putin. Although the mutual appearance still occurred at the last moment, the climate of the German-Russian relationship has been called "icy" by many commentators in the meantime.

So we can be curious as to how the coming personal transits will affect their behavior and decisions. Whether Vladimir Putin may still develop into a true friend of humanity; whether Barack Obama will become the great reformer that he claimed to be; and whether Angela Merkel can expand her "nurturing ambitions" beyond the German borders. But there are strong doubts about whether the three of them will soon establish a mutual political cuddle group.