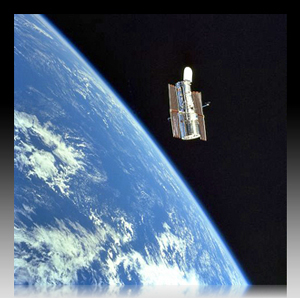 Fresh newsflashes reach us almost every day from the most remote parts of our universe. But whether HUBBLE, KEPLER, or modern observatories such as ALMA, everything that has virtual eyes looks far back – into the past. Information about "new" galaxies that enthuses today's expert circles is sometimes almost as old as the universe itself.

This also applies to this week's news about HFLS3, a galaxy that is 12.8 billion light years away from us . As a comparison: The center of our Milky Way, Sagittarius A, is just 26,000 light years away. What we now can see of it originated about 880 million years after the assumed Big Bang. So this is a glance at the nursery of our universe and shows how productive and creative galaxies were "back then." Every day up to eight new suns were created there, which means almost 3,000 distributed throughout the Earth year; just 1-2 new stars come into existence in our immediate neighborhood today. Per year.

However, it is not the oldest galaxy ever discovered to date. This title has been earned by UDFj-39546284, an especially lyrical name for a collection of stars. What we can still perceive of it today as a type of echo was created almost 380 million years after the Big Bang. For those who would like to mark such cosmic superlatives in their own chart: UDFj-39546284 is located at approx. 23° Taurus. 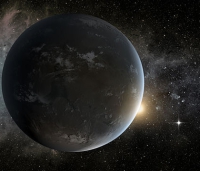 Two other objects that are causing excitement this week are comparatively close, namely approx. 1,200 light years away. Astronomers suspect the existence of two planetary companions that could be covered completely with water in the sun system Kepler 62. They are located within the habitable zone that is presumed to be supportive of life (according to our standards).
But the idea that we are not aware of whatever we do not know also applies here. It could be that the one of them (Kepler 62f) is just an Earth-size snowball and its neighbor does not have enough cloud formation to keep the precious water inside its atmosphere. Nevertheless, the two of them are at least promising candidates for life in our neighborhood. Anyone who would already like to wave should do so in the direction of 13° Capricorn, right where Pluto also traverses at the moment. 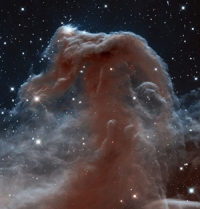 We have also learned something new about a classic – or at least have a new picture of it. Astro rock star Hubble shows us a different view of the Horsehead Nebula for once.

This would actually be the horror of all virginal neurotics with an obsession for cleaning: gas and dust covering an expanse of almost three light years. Not even a supersized cosmic vacuum cleaner could help here. If we could see Barnard 33 – which is its official name – with the naked eye, it would be almost as large as a young moon.

But we just have the pretty pictures from NASA. For those who would still like to risk a glance at the sky: The Horsehead Nebula is located across from the Galactic Center at about 25° Gemini. 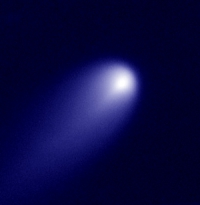 Those would prefer things less placid and are also speed freaks will certainly be pleased at the news about Comet ISON. It is currently racing toward the Sun at the speed of about 76,000 km/h and will almost merge with it on November 28.

It will hopefully just be almost because that would allow the opportunity for a grandiose spectacle in the sky. Accordingly to the experts, it could shine as brightly as the full moon and even during the day at times. This would be a new Christmas star for the end of the year. We can just hope that the respective well-known doomsday prophets do not interpret it as an evil omen once again.

As preventative reassurance: It will only approach our blue planet at a distance of 60 million kilometers – on the day after Christmas.

As so often, we can thank the space telescope HUBBLE for most of these pictures. HUBBLE just celebrated its birthday: It was launched into space on April 24, 1990 with a space shuttle and set out one day later.

HUBBLE's chart (starting from the Earth) shows a Sun-Moon conjunction in Taurus, which may explain its high degree of reliability and long lifespan. However, there were also substantial problems at the start since every image that HUBBLE sent to Earth starting on May 20, 1990 was blurred (greetings from Mercury Opposition Pluto…). It was only possible to replace the flawed mirror in December 1993. Thanks to the T-Jupiter trine Jupiter, everything worked out and HUBBLE has continually renewed our picture of the universe time and again (Jupiter in the trine to Pisces-Mars and opposition to Sagittarius-Uranus).

Even Captain Kirk and Mr. Spock can thank the little robot for some of the backgrounds in STAR TREK since much of the cosmic fog through which the ENTERPRISE found its way in the infinite expanses came from its cameras.
And at least until the start of its successor, the James Webb space telescope in 2018, the HUBBLE will continue to deliver pictures that no human being has ever seen before.