Stargates - the End of Randomness

Randomness is not unfathomable.
It has it´s regularity.
- Novalis -

Preface: This article was first published in 2016, after the European Soccer Championship. Originally it was written in german, so if some of this translations may sound funny, please write us a note and we will do better. And yes, we know that even the title may sound like a mistranslation, cause this article is about goals and not gates. But Stargates sound much better then Stargoals, so please be lenient... Also this article is about facts and not about the philosophy behind this research. But in future we would like once again to show our evaluation between the goals scored during the World Soccer Championship 2018 in Russia and significant, astrological aspects. And we will point out that everything we show up here, has not changed even two years later.

Research is sometimes really boring, astrological research makes no exception. Because one of the bases for any reasonable research is the collection and analysis of data. But if someone promises, that the current European Football Championship will be a good chance to be surprised (as we did about four weeks ago), then of course it´s an obligation to evaluate the relevant data.

Maybe it's also appropriate in this context to refute a widespread opinion regarding astrology and statistical analysis. Because even many colleagues who otherwise do a good job, believe that it is not possible using statistics to confirm astrological statements. Provided that this refers to certain human traits or behavior patterns, this attitude may well be right. In this context, it is also difficult to understand why so far such investigations are carried out mainly. Cause how can you clearly assign specific characteristics astrologically?

Of course, the various Zodiac-Signs include different characteristics and mark especially certain stations in each development. Where the associated expressions can take shape in its purest form, the individual characters also distinguish clearly. Only the entire Astrology employs up with a phenomenon which is extremely complex and multifaceted. We call that normally very simply - TIME.

But in fact this is about the complexity of developments that always have their origin in a foundation which cannot be found in the past or in the future. And also our concept of presence comprises only a small part of what this naturally involves. Accordingly, the real debate thus brings strange and paradoxical truths to light that cannot be reconciled easily with our traditional world views and explanations.

And yet again things are then sometimes very simple, because if we deal with this phenomenon of time, then we find in all developments highlights and special features, which can be described very vividly by some astrological methods. And most clearly it shows up where man has largely abandoned the rational control and surrenders to the wild river of this dynamic flow we call TIME. 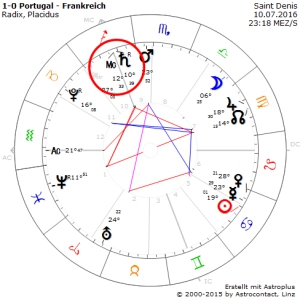 Thankfully, this happens quite often in important football matches, as at this year's European Championship. The pressure through the expectations of millions of people is so great, and the interaction of 22 athletes within a limited area and for a limited time so complex, that there are moments again and again, where the wild river of time can show up in all its complexity. Then the people on the field become vivid expressions of this force and depending on their own ability to resonate with the current circumstances, they will become decisive or not.

In simpler terms - if one or more players are in line with this dynamics, they can take advantage of the highlights already mentioned, and do what is ultimately the best at every soccer game: scoring goals.

Fortunately for astrological researchers these highlights are almost always extremely well documented, so what otherwise often limits the validity of a study, because the basic informations are inaccurate or incomprehensible, is here completely different. There are millions of witnesses, who witnessed these goals and the times at which they have been fallen. And there are countless media, that have recorded it and as many statistics and archives that can provide information even years later, exactly when a goal is scored, who shot it and in most cases, what the the circumstances were, that led to it.

Everything thing missing then are equally precise calculations and corresponding pictorial representations to illustrate this highlights even astrological. Of course there could be many different approaches, but as so often, life is in this case quite simply "knit". When I started looking at astrological triggers during sports events many years ago, of course at first I wanted to know, whether it´s possible to determine in advance the winner of a competition.

Because that was according to my former understanding, what critics of astrology demand again and again: precise forecasts of future events. However, it´s like putting a hat on a hen – if this is even possible, there must indeed be absolutely certain, astrological constellations that every winner, no matter in what sport, gets painted as a kind of cosmic seal on his forehead. Anyone who has ever dealt with it, mostly realized in a very short time, that there is no such thing. The old myth of the lucky planet Jupiter proves just as silly as the fear of the alleged accident-planet Saturn. By now I've experienced politicians who have won an important election with an exact square from Saturn to their natal Sun, while the crew of a famous football coach lost 5-0, when Jupiter stands in trine to his natal Sun.

Such experiences and observations can quickly lead untrained and flighty spirits to premature conclusions, for example, that the entire astrology is just nonsense. But what is then usually overlooked is the fact that these triggers are nevertheless always (!) exact. So no “Pi * thumb” aspects with an orbis of several degrees, but extremely accurate transits, usually accurate to a few minutes of arc.

And the more one directs his attention to this fact, the more incredible the results become. So who still thinks that astrology is just a philosophical-symbolic imagery that includes only some rough and approximate half-truths, should look at the following list of goals very closely. Because in it all 108 goals are recorded, which were scored at the 2016 European soccer championship. The game, the teams, the date, the exact time (hour and minute) and the city, where the game took place. 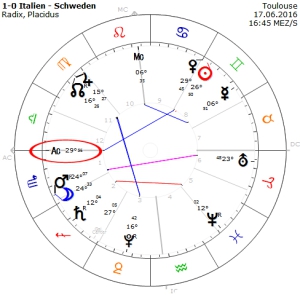 The links in the first column open the respective chart, which has been calculated for this particular place and time using a computer program. So the result is nothing fictional, but merely the illustration of one of these astrological highlights that we have been observing in this form for almost 20 years now. Exactly these highlights we had here in our FIRST ARTICLE FOR EURO 2016 announced:

The following list now includes only once the criteria of point 2, there are only local event horoscopes, without the involvement of players or coaches. And they have just been created at the time points at which doors actually fell. Read among others in the "ticker" of the sports magazine KICKER , where these times, minutes have been recorded by independent journalists who did not know about our research.

So here is the list of all 108 goals of Euro 2016 with names of the country opponents, date, time and the appropriate, astrological triggers. Please click on the links in the column MATCH to open the corresponding charts (browser pop-ups must be approved and please don´t be surprized - the names on the event charts are still in german), so you can check everything we've said here with your own eyes.

Brief Explanation of Abbreviations:  AC = ascendant; MC = Midheaven; DC = Descendant; IC = sky depth immune Coeli; Con = conjunction; Opp = opposition; Tri = Trine; Squ = square; QCX = Quincunx;Sex=sextile.
AC Mars means that Mars was at the time in conjunction with the event Ascendant, then the same also applies to the other axes. MC-AC ZW designates the sign change of ascendant and midheaven or descendant and IC.
As a general orbis for axis transitions and sign changes we took 2 degrees, everything what was within this radius, edged red on the drawings. Everything that not referred to the original statement, but is still relevant, is edged blue, but considered in the subsequent evaluation as NOT. 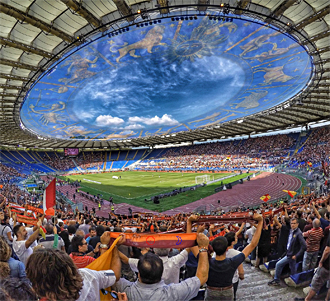 As already mentioned, with a single click on the link, you can view the entire chart and will find in many cases that there was not just one of these triggers. Publishing the 108 charts here was a lot of extra work, mainly so they can be reviewed by independent observers.. Because in my experience, hardly anyone would bother to check my statements based on internal calculations. Then, however, it remains a pure matter of faith, so I ask sincerely that everyone make use of the possibilities. Because also mistakes such as wrong dates could have "crept in". So I expect specially the so called skeptical critics, who usually claim that "astrology is nonsense", that they will review and prove the upper statements based on the material provided.

And then tell me how a system "can be nonsense", which now again (as with the previous European and World Championships) clearly and unambiguously produces results, that cannot even be approached by any other method or science of our time. Because after all you will find out, the triggers we mentioned earlier did not only occur at 10% or 20% of the goals (which, statistically speaking, would be astonishing enough ...)

No - at 79 out of 108 goals, exactly these triggers are detectable, which we have repeatedly described before. In other words: 73% of all goals of this European Championship have been scored under clearly relevant constellations. Constellations that occurred not once but several times during the tournament. Alone the transition of the planet Mars, either through the local event Ascendant or the MC, is found 15 times in 12 games, when there was a goal.

And you cannot emphasize it often enough - all of this are just mathematical-astronomical facts, these triggers are no interpretations or explanations, all astrological charts just show the current state of the sky from a local, geocentric perspective at these special moments. But that's exactly what astrology works for, and so far these facts should at least raise questions among die-hard skeptics.

While they should provide security for those who like to work sincerely with the astrological model. And above all, strengthen the joy of really using this wonderful and constructive system, wherever it can help to make the world a better place.